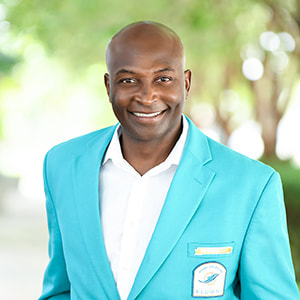 Otis James McDuffie  is a former American college and professional football player who was a wide receiver in the National Football League (NFL) for eight seasons. He played college football for Penn State University, and earned All-American honors. A first-round pick in the 1993 NFL Draft, he played professionally for the NFL's Miami Dolphins.

McDuffie was born in Marion, Ohio. He attended Hawken School in Gates Mills, Ohio, excelling in football, basketball, track and field and baseball. He set Hawken's record for all-purpose yards with 7,302 in his high school career. In 1986, McDuffie returned an interception 108 yards, an unofficial Ohio state record.  During his senior year in 1987, he was named the A-AA OhioPlayer of the year. For the 1987 high school football season, he scored 136 points.

McDuffie also played one season of varsity baseball in 1990 while at Penn State. He still holds the PSU record for stolen bases in a single game with 4, and is in the top 10 for stolen bases in a single season.  McDuffie was drafted by the then California Angels in the 41st round of the 1991 Major League Baseball Draft but did not sign.  He earned a Bachelor of Science degree in labor and industrial relations from Penn State in 1992.

The Miami Dolphins selected McDuffie in the first round (25th pick overall) of the 1993 NFL Draft.  During his formative years with the Dolphins, McDuffie became known as Dan Marino's favorite receiver.  His 415 career catches are fourth all-time in Dolphins history.  In 1998, McDuffie caught 90 passes, leading the NFL in that category. He is the only Dolphin to achieve this mark. That same year, McDuffie became the first player in NFL history to record at least 90 receptions and 10 punt returns in a season without a fumble.  He played his entire career in Miami, retiring in 2000.