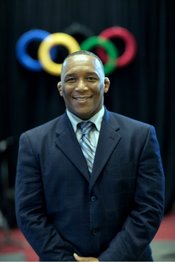 Nate Carr was an American collegiate and international level freestyle wrestler. He grew up in a family of 16 children. Five of which, including Nate, would become All-American wrestlers (an NCAA record) and two, again including Nate, would compete in the Olympic Games.  Carr received a wrestling scholarship to Iowa State University, where he had a career record of 117-20-1 in the 150 pound weight class. He would earn three NCAA championships and two Big Eight Conference Titles.

After graduation from Iowa State, Carr continued his freestyle wrestling career at the international level. Carr was a 1983 and 1990 World Championship team member, in 1986 won both the World Cup and the Pan-American Championships and won the Goodwill Games in 1990.