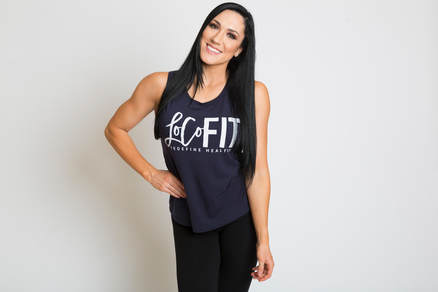 Laurin has her Masters in Exercise Science and is an IFBB Bikini pro. She is the owner of Team LoCoFit, an online nutrition coaching and consulting business. She is a speaker, host to two podcasts and works with many companies within the industry.
Laurin’s Masters research focused on how different dieting strategies effect weight loss and weight regain. Particularly, looking at a ‘flexible’ diet where no foods are excluded versus a meal plan, where foods were excluded. Her research was the first study to directly examine this relationship between these two diets.
She competed for several years as an NPC Figure competitor before making the switch to the Bikini division. In 2014, she won the overall at NPC Nationals in Bikini, earning her professional status. Laurin has competed for several years as an IFBB Bikini pro since.
Team LoCoFit is the online nutrition coaching and consulting business Laurin started. Team LoCoFit focuses on quality coaching, putting the clients long term interests first and taking an educated, evidence based approach to all matters. As Team LoCoFit has expanded over the years, they have built up a team of coaches who now also work with clients using the same philosophies and approach as Laurin.
Laurin travels to give lectures and seminars on a variety of topics including nutrition, training, psychological aspects of  dieting, running a business and more. She hosts two podcasts, Redefine Healthy Radio with Paul Revelia and The UNglamorous Life with Celeste Bonin. Additionally, Laurin works with several companies within the industry who align with her values and provide the best products and services within their market.
Champion 2015, 2016, 2018 & 2019